The Lasting Impact of “Paying it Forward” 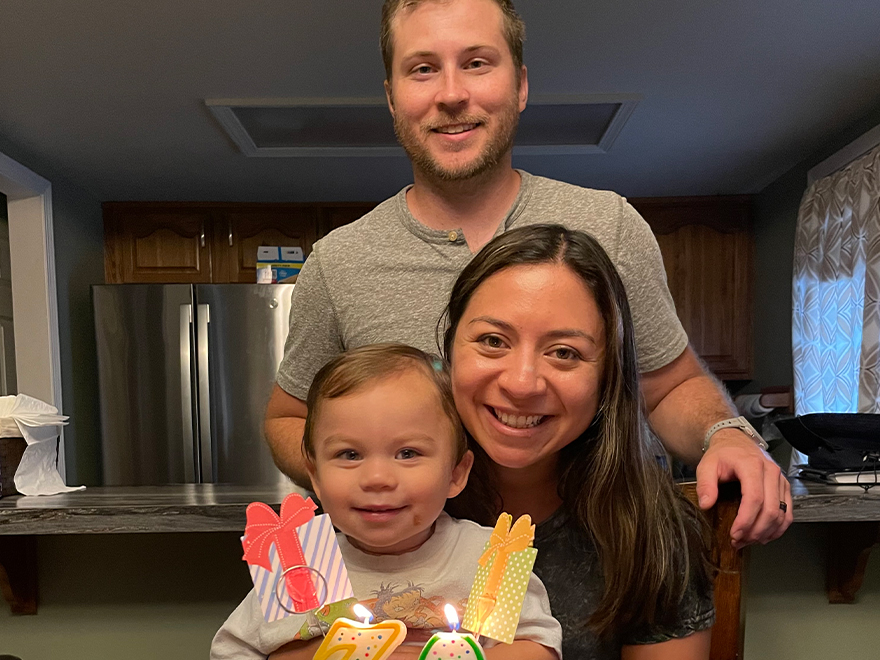 Ann Naffier [co-legal director, Iowa Migrant Movement for Justice] changed my life, and I’ve never met her! Please allow me to introduce myself.

My name is Melvi Cifuentes Paul. I am a mother to a beautiful two-year-old boy named Mateo and a wife to the love of my life, Spencer Paul, whom I met a few years after immigrating to the U.S. at age five. I now work for an immigration attorney in Louisville, Kentucky, where I perform U-Visas, T-Visas, and VAWA work.

I would not be here today with any of the abovementioned titles I proudly carry if it weren’t for Ann.

From 1997 to 2011, I spent fourteen years calling the U.S. home. I believed and felt like a native-born American. I turned 18 in July 2010 and decided to finish high school and make my family proud by obtaining my high school diploma. My only goal at the time was to attend college. I was recruited to a competitive cheer team at age 15 and was on track to attend college on a scholarship.

However, in September 2011, four months after graduating high school, instead of decorating a dorm room and attending cheer practice, I had a one-way flight to Guatemala City, Guatemala.

A few days later, during my consular processing interview, I was informed that my petition would be denied. Ann took on my case a few months to about a year later.

She was the only attorney, the only person who communicated with me directly and spoke to me with honesty and compassion. We corresponded via email and phone calls, and I still remember each one vividly.

At age 20, I had little hope of ever seeing my parents again. I lived in a country I didn’t recognize, know or love. I had blood relatives who were strangers to me, people I had long ago forgotten. Ann was hopeful but never deceiving or leading me to believe the famous line, “it’s going to take about six months to a year.” She was honest, knowledgeable, and informative. When I got frustrated and projected my frustration onto her, she would defuse my hostility with kindness.

I remember her email letting me know they had approved my waiver. We had a lot of uphill battles, which I’m sure are documented more concretely somewhere. At one point, no one in the U.S. embassy could track down my passport. When I finally received my passport with the visa foil, I had a few days to leave instead of the customary six months to get my affairs in order. The day I received my visa, I grabbed my suitcase, which remained pre-packed should the opportunity arise. I grabbed whatever I had left that would fit in my suitcase and handed my apartment keys to the manager. My parents bought me a ticket on the next flight out of Guatemala, and they met me at the airport Thursday, May 14, 2015.

I spent three years and eight months in Guatemala, waiting to return home. Eventually, I grew to love and appreciate Guatemala. I even learned Spanish! My time there was extremely difficult but incredibly rewarding in the long run.

I enrolled in college in August 2015 and graduated in May 2018 with B.S. in Political Science and minored in Spanish. I met Barbara Hines, a retired law professor at UT Austin, who encouraged and sponsored my trip to volunteer at RAICES in San Antonio. I worked at the Karnes Detention Center and performed intakes and release talks with the women and children detained there. I was somehow lucky enough to attend a CFI [Credible Fear Interview] for a young girl from the Northern Triangle and advocate for her when she was misunderstood [by the interpreter.]

I thought that starting a law career at thirty would be impossible. But that experience solidified my pursuit of a career I sincerely believed was too late.

I married Spencer two months before the start of law school. I found Sofia a few weeks after classes commenced. [Sofia Calleja is the Legal Director for Neighbors Immigration Clinic, our ILJ affiliate in Kentucky.] Every time I wanted to give up, she was there to help me get through! She would share notes, break concepts down, or listen to me when I needed a friend in a space that no one I knew had navigated. Law school can be a very isolating experience.

I interned at Ayuda, Inc. in Washington, D.C., which continued to fuel my fire for immigrant rights and advocacy. But, I must share that when I thought having a family would be something I would have to push further back in my timeline, she was the one who encouraged me and told me that it would all work out. And it did! I had my son in the fall of my last semester of law school in the middle of a pandemic! YIKES! I graduated in May 2021 and work for an incredible woman and mother of two who practices immigration law. Kristen Barrow, my boss, mentor, and friend, was brought into my life by the one and only Sofia. I was approached to look into the board at Neighbors also by Sofia. [note: Melvi is now a board member for Neighbors Immigration Clinic.]

All of this would be impossible if it weren’t for Ann and the ILJ Network.

Ann, I hope that you have never felt hopeless in your efforts to represent clients during your career. If at any moment you have felt like your work hasn’t made an impact, I want you to know that I am so grateful for you. I am so honored to have been your client. I am forever thankful for the day you decided to take my case on when many saw all of its flaws and complications.

I remember you each time I sit with a client, and I treat them with the same level of empathy, compassion, and respect you showed me.

Thank you for allowing me to share this part of my life with you all. 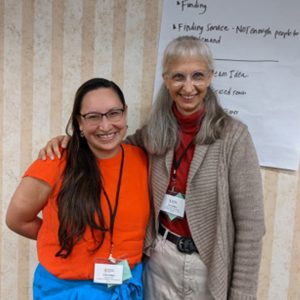 Sofia Calleja, legal director for Neighbors Immigration Clinic (left), and Ann Naffier, co-legal director for Iowa Migrant Movement for Justice (right), met up at our ILJ network-wide conference in Baltimore this past September. Sofia was under strict instructions to seek out Ann and pass on Melvi’s greetings and thanks.

“It was a beautiful moment,” says Ann, “to see how our work in Iowa was coming back to bless the entire ILJ network!

Justice in their Corner

Immigration Law & Justice Network is a 501(c)(3) non-profit organization. Our tax identification number is 45-4044201. Contributions may be tax deductible.

Justice for Our Neighbors Michigan

Justice for Our Neighbors of the Delaware Valley

Formerly National Justice for Our Neighbors.

Austin Region Justice for Our Neighbors

Justice for All Immigrants

Justice for Our Neighbors North-Central Texas

Justice for Our Neighbors El Paso

Arizona Justice for Our Neighbors

Northern Illinois Justice for Our Neighbors

New England Justice for Our Neighbors

New York Justice for Our Neighbors

Justice for Our Neighbors El Paso

Tennessee Justice for Our Neighbors

Central Washington Justice for Our Neighbors

Florida Justice for Our Neighbors

Fayetteville Justice for Our Neighbors